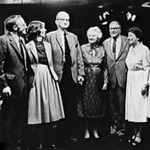 "Some 400 alumni and other friends of Colby gathered in Dedham, Mass., in November [1981] and were enlightened by the insights of the three men who have served as president of the college over the past 40 years. J. Seelye Bixler, Robert E. L. Strider II, and William R. Cotter each provided the audience with his thoughtful view of Colby and its role in the liberal arts. The unusual event was organized and sponsored by the Greater Boston Colby Alumni Club, presided over by Ann Miller '71. Peter Vogt '63 filmed the event and has produced a twenty-minute film that will be shown at alumni meetings and other special events." -from The Colby Alumnus, vol. 71 no. 2, Winter 1982, p. 12. http://digitalcommons.colby.edu/alumnus/116/ ×